The Frank and Marilyn Tribute.

The Chairman and The King
with a top Elvis Impersonator.

An Evening with The Stars. 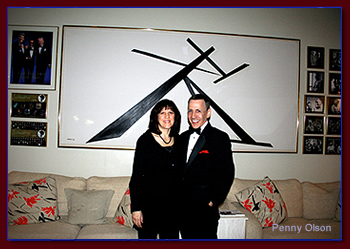 A photo in front of a painting by Mr. S. in his theater room, after performing at the former Frank Sinatra Estate in Rancho Mirage CA.

In the 1980’s, the Media did a spin on The Rat Pack, dubbing a group of up-and-coming young actors "The Brat Pack". They're best known for the original Brat Pack movie, “St. Elmo’s Fire”, along with a film called “The Breakfast Club”, and Molly Ringwald’s “Pretty In Pink” and “Sixteen Candles”. The Brat Pack included Judd Nelson, Ally Sheedy, Rob Lowe, Andrew McCarthy, Demi Moore, Mare Winningham, Molly Ringwald, and Emilio Estevez, who happens to be Charlie Sheen’s brother, and who uses his dad Martin Sheen’s original family name.