The Rat Pack is re-created
by these Rat Pack Impersonators. . .

It's a trip back to the exciting atmosphere of Rat Pack era Las Vegas, with music, comedy, and the camaraderie of three legendary friends that made history on the stage of a Las Vegas showroom, and inspired this popular Rat Pack Tribute show performed by America's three most sought-after Rat Pack Impersonators. The Rat Pack tribute seen performing at the Elks Lodge in Garden Grove CA at a fundraiser for Children's Hospital of Orange County. The authentic Rat Pack tribute headlining at the Lancaster Performing Arts Center in Lancaster CA where they recently returned for another sold-out, highly successful show. The Rat Pack impersonators performing the tribute at the Bellagio in Las Vegas for a large corporate event. 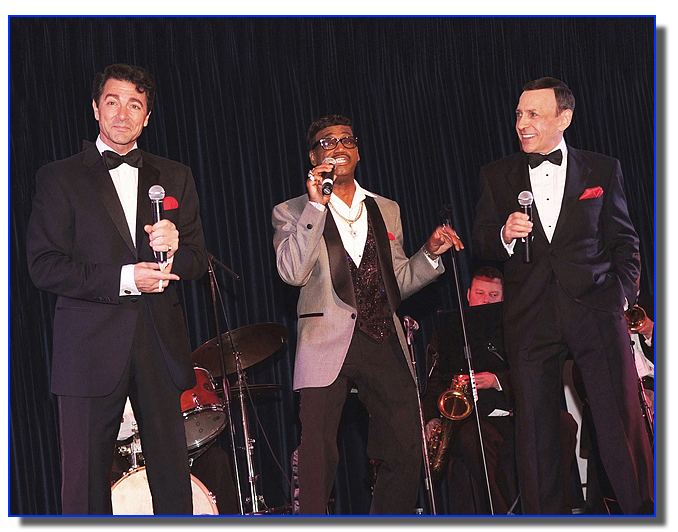 Songs you'll hear in this Rat Pack Tribute include favorites like Frank Sinatra's Come Fly With Me, Fly Me To The Moon, and I've Got The World On A String. There's Dean Martin's Everybody Loves Somebody, That's Amore and Volare, among others.  And completing this musical tribute are Sammy Davis Jr. songs like The Candy Man, I've Gotta Be Me, and the classic Mr. Bojangles. Right before a Rat Pack tribute show in Las Vegas.

There's that famous brotherly relationship with these talented impersonators launching into some playful duets, lots of laughs - planned and spontaneous, and even more great music with favorites like The Lady Is A Tramp, Luck Be A Lady, and the grand finale when all three Rat Pack lookalike & soundalike performers bring audience members to their feet with a rousing rendition of New York, New York. The former host of America's Got Talent, Nick Cannon, with Andy, Lambus and Monty at the Legacy of Vision Gala for the Los Angeles Mission, which featured a performance of the Rat Pack Tribute show.

A Show for all Occasions

The Rat Pack Tribute is a crowd-pleasing show, seen at many casinos and casino nights, award banquets, fund-raisers and holiday parties, performed with a live band or to high quality pre-recorded accompaniment. And in addition to their uncanny individual re-creations of the originals, these three performers bring back the laughs, the interaction & pure fun of a magical time gone by, in one powerful show of non-stop music and comedy that was The Rat Pack.

What clients are saying...

"The Rat Pack performed to a sold out crowd at our fundraiser. Every person was immersed in the show and actively participated! We want the Rat Pack back next year. The show will be billed as "The Rat Pack, Back by Popular Demand!"

"Thank you for a terrific show. We were delighted as every new song began!"

"You three were incredible. The audience loved you!"

"Thanks for a great show! You continue to be the talk of the group and I look forward to the next time we can work together"

"Thank you for a fabulous show and evening!"

"Just wanted to tell you how much our audience enjoyed your Rat Pack show and how much good will and interest in our season you got us in word of mouth community buzz. Thank you so much!"

"Thank you for all you did to make our Angel Charity Event such a success."

In addition to Frank, Dean, Sammy, Joey Bishop and Peter Lawford, some occasional Rat Pack members included Tony Curtis, his wife, actress Janet Leigh, and Shirley MacLaine, a co-star in the film "Some Came Running", plus Angie Dickinson, of "Ocean's Eleven", who continued to visit at the Sinatra home well into Frank's later years.

In 1998, HBO aired a film about the three legendary Las Vegas stars and their famous friendship, but instead of casting the production with Rat Pack Lookalikes, the principals were portrayed by three fine actors, Ray Liotta, Joe Mantegna, and Don Cheadle.